On Exhibit: Shape of Light--100 years of Photography and Abstract Art at London's Tate Modern: Now-October 14, 2018

In This Issue:
In This Issue:
Group of Reportedly Altered Daguerreotypes with Dubious Signatures, etc. Appears on Market and Includes Daguerre, Le Gray, the Bisson Frerer and Th. Jacobi
On Exhibit: Shape of Light--100 years of Photography and Abstract Art at London's Tate Modern: Now-October 14, 2018
Forum Auctions Launches Its First Photo and Photobook Auction in London on Friday, June 1st.
Bonhams Auction House May Be up for Sale Again
James Ganz to Join the Getty as Senior Curator of Photographs
Photo Books: From Paper Promises to Tintypes to a Land of Epic Battles 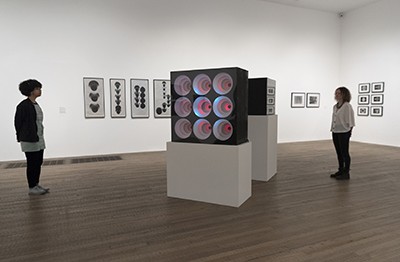 The relationship between art and photography has been the focus of an increasing number of exhibitions over the last ten years. Most have taken a broad sweep, that is, linking photographic portraits to oil paintings, Julian Margaret Cameron being a favorite choice; history paintings, often of a lesser kind, to Jeff Wall light boxes; or Dutch still lifes with works by whichever contemporary artist who has decided to raid art history for some inspiration. The conclusions drawn have been facile to say the least, with photography often coming across as the poor relation, merely imitating painting.

It was therefore with a great deal of trepidation that I went to see "Shape of Light," Tate Modern's new exhibition that focuses on abstraction. I needn't have worried about the quality of the works. They are of the very highest order. And there are plenty of them. Over 350 works by over 100 artists spread across 12 rooms. The abundance of riches is simply overwhelming, not to say exhausting.

The press release promises that it will "explore photography in relation to the development of abstraction, from the early experiments of the 1910s to the digital innovations of the 21st century." Except, it doesn't quite do that.

Most of the rooms have only one or a few paintings, or a sculpture, but are mostly full of photographs.

While there are introductory texts and captions, they are for the most part simply not informative enough. This could have been salvaged somewhat by a decent catalogue, but it smacks of compromise. Its small format has one essay, each by the four curators, Emmanuelle de l'Ecotais, Simon Baker, Shoair Mavlian, and Emma Lewis, but there are no biographies of the artists, a great shame as many of them aren't exactly household names. And too many questions are left unanswered, topics left uncovered. I suspect that many visitors will come away with the impression that abstraction in art and photography has simply been one long experiment with form and techniques; lines, circles, patterns, rectangles, drips, blotches, flashes, using everything from paint and chemicals to computers and Kindles.

Well, that is one end of the spectrum. The other is the spiritual/emotional impetus, and with many photographers there would be a tension between the two.

Emmanuelle de l'Ecotais' essay refers briefly to Wassily Kandinsky's book "Concerning The Spiritual in Art", published in 1911, quoting "our time is that of The Great Separation between the real and the Abstract, and of the flowering of the latter", but this is not dealt with in any depth. Kandinsky was deeply influenced by Theosophy, as were Mondrian and Malevich, leader of the Suprematism movement, whose dismissal of Alexander Rodchenko's 1917 exhibition as "Construction art", gave name to the movement led by the latter, Constructivism.

I'm reminded of the tension between spirituality and experiment that is present in the first room, where a group of Alvin Langdon Coburn's Vortographs hangs next to "Workshop" (1914-15), a painting by Wyndham Lewis, co-founder of the Vorticist movement.

In 1916, Coburn built "The Vortoscope", a contraption with three mirrors, fixed in a triangle, through which he photographed various surfaces as well as a portrait of Ezra Pound, resulting in images that showed influences of Cubism and Futurism. "The principle was similar to the old kaleidoscope. The patterns fascinated and amazed me," Coburn stated at the time.

But his initial enthusiasm didn't last. Coburn was unable to reconcile Vortography with his spiritual leanings and soon abandoned it.

On the opposite wall, next to Georges Braque's "Mandora" (1909-10) hangs Pierre Dubrueil's masterful "Interpretation Picasso, The Railway" (1911), made by printing a negative of a locomotive diagonally, repeatedly effacing the surface of the print with a rectangular form, producing a transparent overlapping of geometric planes.

The next stop deals with Camera Work and the Little Galleries: Stieglitz, Steichen and Paul Strand. Here are Strand's 1916 abstractions, Steichen's "Bird in Space" (1926) and standing close by is Constantin Brancusi's sculpture "Miastra" (1911). Also on display is a group of Equivalents from 1929, where Stieglitz found that he could reconcile straight photography with the emotive/expressive power he had previously infused in his Pictorialist images.

Lászlo Moholy-Nagy dominates the room named New Vision. He moved effortlessly between painting and photography, as two works from 1922 indicate, "K VII", a painting and graphite, its lines and blocks, bearing a strong likeness to an untitled photograph from the same year. Included are also his two views from the Berlin Radio Tower from 1928, as well as a photogram from 1925. There are also a wonderful group of Rayographs by Man Ray, produced 1922-1927; and works by Rodchenko, Germaine Krull, Jaroslav Rössler, Francis Brugière and Christian Schad.

Brassaï turns up twice here, first with his abstract nudes; and, close by, a group of Kertész's "Distortions" and Imogen Cunningham's "Triangles".

Brassaï turns up again in the section named Surface and Texture, with works from his Graffiti series from the 1950's. Next to them are Guy Bourdin's rarely seen abstracts of walls and corroded surfaces from the same period; and on the opposite wall, a group of wonderful works by Aaron Siskind. 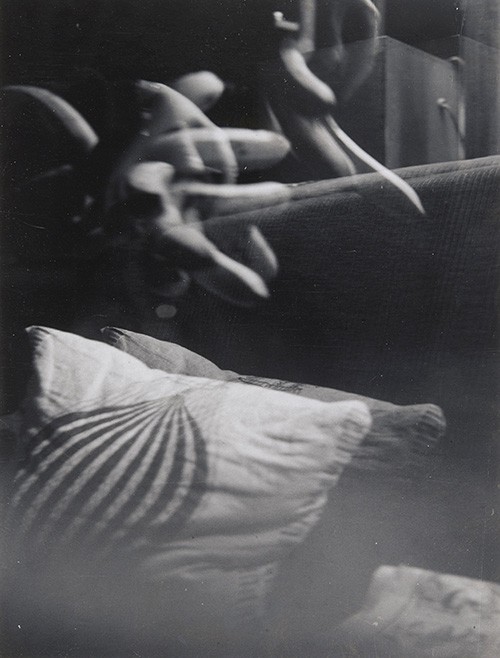 The exhibition also revisits MoMA's landmark photography exhibition of 1960, "The Sense of Abstraction", with installation photographs and some of the works originally featured in the exhibition, including photos by Siskind, Edward Weston, and a series by Man Ray that has not been exhibited since the MoMA show 58 years ago. The images are Polaroids; Man Ray made them by swinging his camera around his Paris apartment, which he then sent to New York, where MoMA's printer made enlargements of them and dubbed them "Unconcerned Photographs".

In his essay, Simon Baker, discusses the 1960 exhibition and compares it with MoMA's first exhibition on the same theme, "Abstraction in Photography" in 1951. He also makes the observation that the resemblance of works by Nathan Lerner from the 1939, Arthur Siegel from 1940 and Otto Steinert from 1952, and Pollock's drip paintings of the late 1940's, "tells us nothing about the influence and affinity, but instead suggests that two distinct medium, drawing back into their own very specific qualities and limitations, can reach visual conclusions that strain at the seams of resemblance."

Something similar could be said for photographic genres. The exhibition is focused on photography made with artistic intent, and therefore excludes scientific photography where perceived artistic beauty is merely a by-product. So it's perfectly understandable that there are no such images here. And yet it feels like a fudge somehow. The thing about photography is that it opens doors you hadn't quite expected it to.

And a similar case could be made for documentary photography. Looking at Ellsworth Kelly's "Sidewalk, New York City" (1970) and "Laguna Niguel" (1973) by Lewis Baltz, I am reminded of some of the images made by Auguste Salzmann in Jerusalem in 1854, for the purpose of documenting the city's ancient monuments and buildings.

There are a good many works in the exhibition that could be described as iconic, but equally many that have rarely been exhibited—images by José Yalenti, Sameer Makarius and Gaspar Gasparian, to name a few.

Many photographers have focused exclusively on the formal aspects of abstraction, but some have taken this to its extreme. Among the latter is Johannes Jäger, who coined the term Generative Photography to describe his process, as seen here in his "Pinhole Structures" from 1967. Jäger reacted against two dominant strands in West German photography, subjective photography and total photography, with the aim of moving away from the enigmatic in art and towards clarity, transparency and rationality. In essence, he wanted to remove the unexpected human element from the act of making and instead program an idea that would continue, in perpetual motion, until it was stopped. In many ways, Jäger's work can be seen as precursor to digitally generated imagery.

It's interesting work. The problem is, by the time you reach it you're more than likely to be utterly exhausted. The works in the exhibition require time and attention and unless applied, the subtleties are missed. The Sigmar Polke works from 1992 probably look like yet another series of blobs to some visitors, but they take on a different meaning when you realize that Polke made them by placing chunks of uranium on photosensitive plates and negatives and then left them there for weeks. 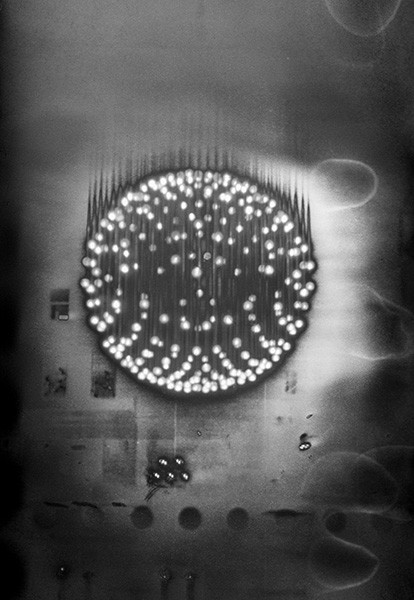 The last section is devoted to contemporary practitioners, including Thomas Ruff, seen here with his series "Photograms 2012-2015", made with software that simulates the darkroom, complete with virtual light sources, photosensitive surfaces and 3D-rendered objects that together, create digital photograms.

But it was Antony Cairns' work that impressed me the most here. He describes his work as recycling. Since 2002, he has photographed cities at night, London, Paris and Tokyo, a vast archive that he uses as source material for his projects. He is curious about not only the buildings themselves, but also the psychological effects of built-up architecture.

For "E.I. LDN022" he has hacked Kindles, harnessing the electronic ink used in the tablets, with ink screens placed in Perspex frames, arranged in a large grid. Cairns has previously described them as "new daguerreotypes", and while the sizes and frame bring to mind the era of cased images, the images themselves--black and white, sketchy, indistinct, ghostly--seem to point to the dystopian future as envisioned by J. G. Ballard.

Michael Diemar is a London-based collector and consultant. He is also editor-in-chief of The Classic, a new free magazine about classic photography. He is a long-time writer about the photography scene, writing extensively for several Scandinavian photography publications, as well as for the E-Photo Newsletter and I Photo Central.